Quick facts about virtualization and the cloud

Virtualization
Imagine a company with five servers, each assigned a single task such as storage, email, etc. If there were a spike in email traffic, it would overwhelm the email server, causing it to slow down. Adding another server would solve this problem, but it would be expensive and inefficient on days with less traffic.

With virtualization software, you can combine the resources of all five servers in our example. So if the email server gets bogged down, it can borrow resources from any of the other servers with extra capacity. The process is not as simple as it sounds, and businesses often turn to an experienced IT service provider to set up a virtualized environment.

Because virtualization software can be installed on a server in your office, it is totally independent of cloud technology. Sometimes, people misunderstand the difference because the vast majority of cloud solutions use virtualization to improve their services.

Cloud computing
With cloud computing, users can edit documents, save files, and interact with apps that aren’t actually on their computer. Instead, they access these items by connecting to a server via a network or internet connection.

To carry out its purpose, a cloud platform sometimes uses several virtualized servers to provide users with a simple system that appears to be on its own, even though it’s actually shared with several other users and servers. There’s no need to purchase additional servers, and you can also save valuable office space by not having to deploy bulky equipment.

Obviously, scalability is critical in today’s ever-changing business conditions. Cloud computing makes it easier to manage business tasks to maximize productivity. And it helps streamline operations, as more cloud services are integrated. Businesses don’t have to worry about infrastructure maintenance because it is covered by the cloud service provider.

Virtualization and cloud computing are both economical technologies that small businesses should take advantage of. If you want to see what they can do for you, call our experts today!

Published with permission from TechAdvisory.org. Source. 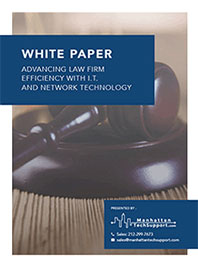 For a lot of people, passwords are one of the worst parts of dealing with technology. It’s not that we don’t want things to be secure, we do, but password management is hard. Making sure that you not only have As some may have noticed, Microsoft has been changing the way they handle cloud licensing for products like Microsoft 365 or Dynamics 365. Called the New Commerce Experience (NCE), the changes aren’t dramatic, but there are enough differences that taking Retiring legacy physical servers and moving to the cloud

Digital transformation is a big part of enterprise businesses these days. The process involves modernizing systems and replacing legacy systems, like bare metal servers, with present-day solutions, like the cloud. As much of a hassle as it is, these legacy